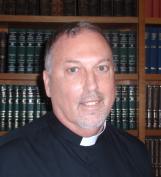 Interesting Facts:
Fr. Joe was born in South Philadelphia and is a member of the New England Province.  Before becoming a Jesuit, he studied at the Rhode Island School of Design, spent two years living in Ireland and served with the Peace Corps in Oman.  After completing his tertianship in Australia, he was named pastor at a 14th century church in Frankfurt, Germany.  Fr. Joe lived in over a dozen states, including four years in Alaska, before returning to the East Coast to begin full-time hospital ministry.

Favorite Sayings:
“Honesty without charity is brutality.”
“Be careful what you ask for because you just might get it.”